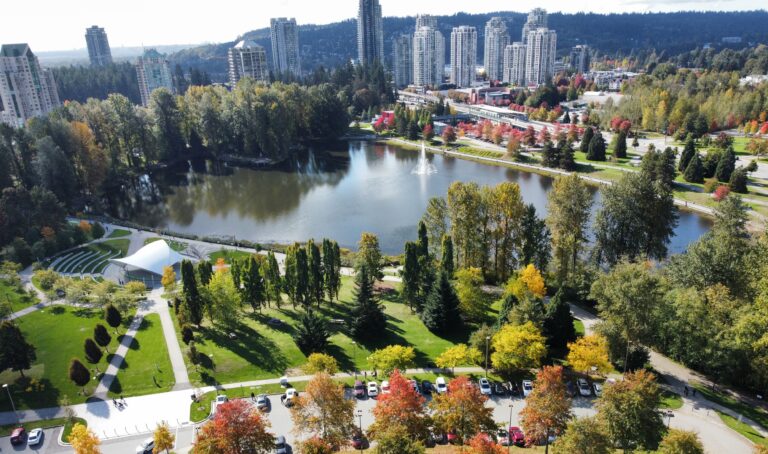 The city of Coquitlam is located north of Surrey, west of Maple Ridge and just 30-40 minutes east of Vancouver. It is part of British Columbia’s Tri-Cities (Port Moody, Port Coquitlam, Coquitlam). And it is the 6th-largest among the 52 cities of the province with its area of152 square kilometres which are six times greater than the other cities of Tri-Cities.

It’s one of the fastest-growing with a population of around 139,000 in 2016 that is expected to hit around 179,000 by 2021. The city name means “small red salmon” as the red salmons routinely travel through the Coquitlam river.

Coquitlam offers an abundance of outdoor activities like hiking, biking and fishing. With its 37,000 acres land area, about 17 acres are allotted for parks, agricultural and recreational areas. The shopping, dining, and entertainment options abound in this progressive city with a great history and mix of cultures.

The Coast Salish were the first inhabitants who still lives and supports the locals and organizations about taking care of the Coquitlam area. The river and lake are abundant in natural resources that helped sufficed the first nation’s needs.

The first European settlers arrived in the area in the 1860s, although Simon Fraser visited the area in 1808.

The Fraser Canyon Gold Rush of 1857 swept through the region after gold was discovered on the Thompson River. It lasted for about three years. Americans, Chinese, Canadians and other foreigners were among the first to notice the rush.

In 1891, the District of Coquitlam was established and in 1908, establishments had been built gradually improving with just around 20 houses, a post office, hospital and barbershop. A Sikh temple and a pool hall had also been built around the mill. It was built as a mill manager’s residence, which later became Place des Arts.

Coquitlam’s downtown is located in the Northern area. The growth in north Coquitlam in recent years has been primarily residential, but the goal is to bring in more companies to improve the area. The offices, businesses and combined nature and commercial buildings are still on their progressive path.

It is home to the largest mall in the Tri-Cities, the Coquitlam Centre. featuring over 200 retails, shops, restaurants and services on its 84,000 square meters of land. It is located south, near the transit station and other smaller shopping centres.

The Henderson Place Mall is a unique Chinese-themed mall with a size of over 22,000 square metres. Pinetree Village is another popular shopping centre in the city with more than 20 shops and services. Other smaller shopping centres in Coquitlam include Como Lake Village, Westwood Mall and Westwood Plateau Village.

The Value Village offers second-hand products from small household items to furniture. For gifts and souvenirs, Giftland and Spencer’s both offer wide options to find gifts from small crafted accessories to plushies and toys to household goods.

The city is packed with restaurants from casual to fine dining experience; A&W, ABC County Restaurant and Austin Gourmet are just some of the many great dining within the city.

Coquitlam is a great place to settle down because of all the outdoor activities, outings, and great food that it offers. Enjoy the mall, parks, and museums but if you want to avoid people you can go to the highlands, rivers, and other natural attractions if you prefer to be around them.

For those looking for a city lifestyle with the convenience of a small town, then this is the neighbourhood. People love it because it has some cool co-working spaces and a great public transportation system, as well as a wide variety of restaurants. It’s reminiscent of the early days of Vancouver’s urban landscape with natural scenery.

The urban conveniences are paired with easy access to fishing, hiking, and a variety of other outdoor activities. It’s a combination of the beauty of nature and the urbanized vibe of the downtown area. It is a nice place for a vacation or even to stay for good.